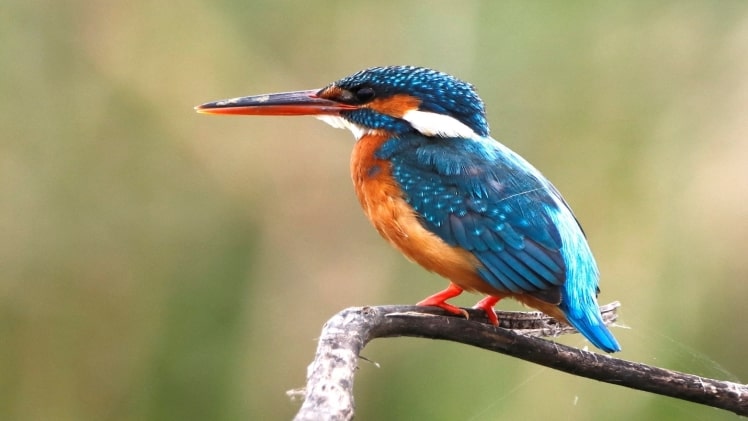 There are three groups of Kingfishers, River, Tree and Water. Colors vary between them but most have great eyesight for hunting, and sharp, long beaks. They are able to hunt for fish that are below the water, take them back and beat them to death before then tossing them in the air and eating them. Those great eyes can adjust to the light refracting on the water, can judge depth and have a protective membrane for when they dive in. There are 12 species of this amazing bird in India and most are not in trouble when it comes to conservation apart from the Blyth’s Kingfisher which is at the stage of near threatened. It is true though that habitat continues to dwindle and water pollution is an issue too. Here is a brief overview of half of India’s Kingfishers.

This black and white Kingfisher are spread throughout a range of habitats, from rivers, lakes, and coasts to mangroves, grasslands and forests. Rather than returning to their perch to eat this species will swallow in flight which means they can hunt across much larger bodies of water.

Also known as the Common Kingfisher this is a colourful Kingfisher with plumage that is orange and blue. They prefer to be next to water that is slow-moving or still and so can be seen more in wetlands and grasslands. They hide in the canopy of trees and have a very high-pitched call.

This is one of the larger species with a red bill and feet, blue plumage and buff underneath. It lives in wetlands and forests and can do well with marine as well as freshwater systems. This bird of India likes it when there is thick plant life to hide in and swoop in and out of.

Also called the Rufous-backed Kingfisher this bird is full of colour. It is yellow underneath, has purple, blue and black plumage above and a red bill. They sometimes look like a flower in all the greenery they sit in. They like moist lowland forest habitats and moist tropical forests as well as plantation areas that have a lot of vegetation near streams and rivers.

Another larger bird these Kingfishers have orange underneath, an orange head, a blue behind with brown wings. You find them on the coast in tidal areas, mangroves and mudflats.

These are medium in size and have black heads, black and blue wings and then underneath is rufous. They preger mangrove forests, coastal areas and wetlands. They have managed to adapt as well to some made made systems such as gardens and farm fields. They are quite solitary creatures.

While the Kingfishers might not be facing an immediate need for attention as mentioned their habitats are being impacted by farming, deforestation, and pollution in the waters. The bird of India that has seen an increase recently in numbers, and is doing better, perhaps in part due to being India’s national bird is the Indian Peafowl. On the other hand over half of the Indian species have declined, in a report that looks at the situation of 867 Indian birds, as gathered by birdwatchers’ observations. It is also the work and collaboration of 10 different conservation efforts and government organisations. While there are some good things, 48% of bird species are stable or are increasing in numbers for example in the long term, in the last 5 years there has been a lot of decline. It is important that action is taken and that people are educated in order to stabilise things among several species.